-> Superior man sees the benefit of all and live his life towards it, Mean man is self-centered, busy comparing him/herself with others, and live his/her live only on one’s own interest.

-> Having know the benefit of all, a superior man see what is right and what is wrong (towards the collective good); the mean man strives for gain regardless of morality and the collective.

7.6 The superior man is composed and at ease; the mean man is always nervous and distress.’

-> When one aligns his/her live to the collective good, he is at peace internally.  While when one is stuck in one’s self-interest and center, he/she is stuck in the nervousness of competition, and distress of attacks and revenge from others.

Confucius introduced the concepts of Superior Man and Mean man.  Superior man is the ideal he calls us to follow, one who see and aligns one’s life towards the collective good; and the Mean man, the inherent animal and self-centered tendencies that focus on selfish gains from others and the world.  In these first three chapters, Confucius called us to see the collective good, aligned with the collective right, which leads to internal peace.  Next three chapters on Superior man and Mean to be continued next week. 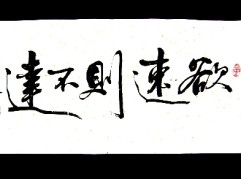 Confucius Analects – Rush and you won’t... 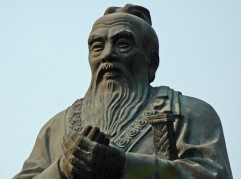