Diamond Sutra – Are we living beings? Are we not?

After learning the highly profound yet seemingly paradoxical teachings from the Buddha, Subhuti couldn’t help but ask the Buddha, based on our limited wisdom, can we as living beings develop faith to accept and follow these teachings?

The Buddha, possessing the perfect 5 eyes which penetrate all truths, see that there is the potential of falling into the attachment of the notion of ” living beings”, responded to Subhuti: in reality, there is no such thing as living beings and non living beings.  They are merely called as such.

Do you understand why the Buddha said so?  Aren’t we living beings? or…  are we not?

尔时，慧命须菩提白佛言：世尊！颇有众生，于未来世，闻说是法，生信心不？
Then the wise Subhuti said to the Buddha: “World Honoured One, will there be in future ages living beings who will believe this Dharma when they hear it?” 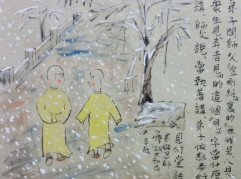 Diamond Sutra – self, others, beings,...